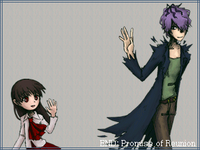 Promise of Reunion is one of the multiple endings in the game Ib. It is considered to be the best ending and is the true ending, due to the fact that this is the only ending in the game to trigger the credit roll at the end. This is one of two endings that includes a picture, the other being Together, Forever.

In order to obtain this ending, Ib must give Garry her handkerchief when he cuts his hand and choose to jump into the painting with him. If Ib does not have enough bond points with Garry, she will not be able to give the handkerchief to him, therefore granting the ending Memory's Crannies instead. As soon as Ib obtains the Pink Key, she will need to go down the bottom path of the white house. This will lead her to a Pink House, the door of which is unlocked by the Pink Key. Upon entering, Ib must locate the Fabricated World painting in order to return to her world. When she approaches the painting, it will state that there is no turning back and her memories of her adventure through the Fabricated World will be forgotten. Garry will look at the painting and tell Ib that if they jump through, they will be in the real world. As he wonders about how to enter the painting, the painting's frame will disappear, allowing Ib and Garry the chance to jump through. Garry will take the opportunity to jump through and encourage Ib to follow suit. At this point, a fake version of Ib's mother will appear. She will state that she has been looking everywhere for Ib and that her father is waiting for her as well. Unable to see the fake mother and concerned about Ib's hesitation, Garry will tell Ib to jump into the painting; but the fake mother will admonish Ib to not follow strangers and tells her to go to her instead. Garry and the fake mother will both encourage Ib to follow either of them, forcing Ib to make a decision. Ib must choose to take Garry's hand.

After jumping out, Ib will be in the real gallery, with her back turned to the painting; but she cannot remember what she was doing. Ib can then move about the gallery, but she must go to Embodiment of Spirit in order to obtain the Promise of Reunion ending. Garry will be there, and Ib must talk to him, during which she can ask him what he's looking at or ask him about the statue. After Garry responds to Ib's question, he will apologize to her for wasting her time and says her name. He will then be surprised because he thinks they have not met before. Ib will confirm that the name he mentioned was indeed hers, leaving Garry to wonder if they had actually met before. Garry will then wave goodbye and leave; but as he is leaving, he will feel something in his pocket and take out Ib's bloodied handkerchief. As Garry wonders where he had received it from, Ib will walk up to Garry and say that it is her handkerchief, recognizing her name that is embroidered on it. A flashback of lb wrapping her handkerchief onto his hand will ensue, and Garry will slowly remember everything. Garry will then talk about their time in the fake gallery and laugh about it. Garry will then ask Ib to confirm if she remembered the same. If the player chooses "I don't remember...", Garry will remind Ib about the lemon candy that he gave her in the safe room, which helps her remember their time together in the gallery. If the player chooses "I remember," Garry will be happy that Ib didn't lose her memories. After confirming with Ib that she has also regained her memories, Garry will ask Ib if he can borrow the handkerchief, as he does not want to return it in its bloodied state and promises that they will meet again. The screen will then fade to black, presenting the name of the game. Afterwards, the credits will start to roll, displaying some extra scenes not shown before in the game. At the end of the credits, a picture of Ib and Garry's departure with the name of the ending will be shown before returning to the main menu.

If Ib's bond level with Garry is eight points or higher, the player will able to obtain Promise of Reunion. These actions add to Ib's bond with Garry:

Retrieved from "https://ibgame.fandom.com/wiki/Promise_of_Reunion?oldid=21133"
Community content is available under CC-BY-SA unless otherwise noted.